Mid-August 2011, the World’s first manned electric helicopter took off and hovered in the presence of a court appointed witness. 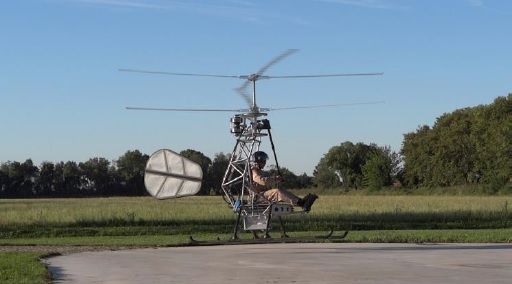 The helicopter was the brainchild of Pascal Chretien who also piloted it. The project was privately funded and executed by Solution F – a French racing car and engine supplier. LiTHIUM BALANCE provided the battery management system and acted as consultants for the battery solution. Being the first to do anything is by definition – forever, it can’t be taken away or superseded. It is a matter of great pride for LiTHIUM BALANCE to have been involved in this historic undertaking.

When Pascal Chretien first approached LiTHIUM BALANCE a little over one year ago (August 2010) it was immediately clear to the engineers at LiBAL that they were dealing with a rare kind of genius. With degrees in Electronics and Aeronautical Engineering along with a commercial pilot license, Pascal had all the ingredients except one – battery systems expertise. LiTHIUM BALANCE provided the battery management system (BMS), the charging solution and sourced the battery pack. The pack was a Kokam softpack, reknown for their high energy density, great quality and good cycle life. Pascal built the cells into a custom pack designed to be light, safe and provide ventilation.

The helicopter design went right back to basics using an ingenious coaxial rotor system (two rotors one on top of the other) which eliminated the need for a wasteful tail rotor. Yaw control was accomplished by varying the speed of two rotors. Every part of the helicopter was made to be as light and efficient as possible and this included the use of ultra lightweight inverters (1.7kg) from Kruspan for the DC brushed motors and a clever pulley system for the rotor drive system. As much as possible was simulated and tested using CAE before being built and Kokam had to supply video evidence of the pack running at 5C continuously without overheating.

Many more clever innovations are hidden in the design and there are patents for other clever ideas yet to come from Pascal Chretien and Solution F. 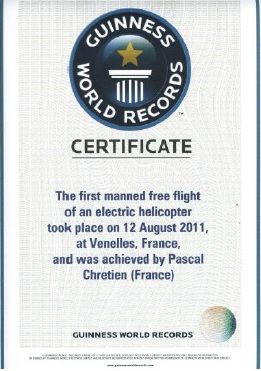